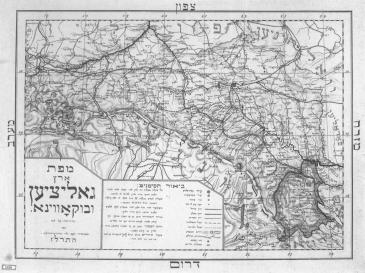 In the aim of widening the circle of students and non-academic audiences interested in Jewish history in Galicia and Bukovina, we are in the process of creating a series of online courses available for people all over the world.

The first online course is given by Prof. Joshua Shanes is titled "Jews of Galicia: A History." The course surveys the establishment, flourishing and destruction of this once vital community by examining its social, economic, political, religious and cultural history from the eighteenth century – the time of the province's creation – to the Holocaust.

"Spotlight – The Lives of Leading Figures in Jewish Galicia" is a new series on the history of Galicia and Galicianer Jews. Over the dozen mini-lectures, prof. Joshua Shanes (College of Charleston, USA) is going to survey some of the leading lights of this wonderful province on the eastern edge of the Austrian Empire and try to get a sense of how modern Jewish history is in many ways represented by the area. Over the course of these lectures, you will learn about famous Galician writers and artists, entrepreneurs, politicians and intellectuals who defined the modern Jewish experience in the Eastern Europe and beyond.